Born and raised in Glasgow, Stuart went to the University of Glasgow to study Molecular and Cellular Biology. As part of his degree, he spent a year working at a small biotechnology firm in Oxford which is developing a method that promises to improve drug design.

After his undergrad, Stuart started a PhD at the University of Edinburgh, funded by the Wellcome Trust. He chose to work in a lab that was just starting to work in Staphylococcus aureus. His project looks at how S. aureus regulates its own virulence after infecting the human bloodstream.

I studied biochemistry at King’s College London, and have moved to Edinburgh for my Masters & PhD. On a short-term reduced-calorie diet, males lose fat and get better at processing their blood sugar, but females lose muscle and don’t get better at processing their blood sugar. My research is originally based on trying to find out why this is the case, and has since branched out into looking at sex differences in metabolism. My work has some very tangible impacts on diet and exercise advice in healthy eating and in weight loss. 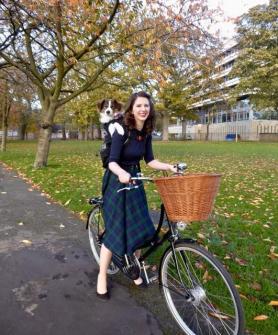 Machine learning is a great strategy for dealing with the huge amount of data detected by modern physics experiments. Christine started out at Imperial College doing her masters using machine learning on particle physics data from CERN, and now she’s doing a PhD in Data Science at Edinburgh looking at machine learning with gravitational wave data.

She works on the LISA mission, which is a gravitational wave detector that is going to be launched into space in the 2030s. She uses machine learning classification algorithms to find noise in the data that can mimic gravitational waves, but the noise is really just caused by the instrument or the local environment. If we can successfully identify and mitigate this noise, we’ll be able to make more accurate inferences about known sources of gravitational waves (e.g. black holes and neutron stars) and we’ll be able identify new sources too.

I am perhaps a bit of an anomaly for a ChatSci speaker. To begin, rather than a practicing scientist, I am primarily a philosopher of science, specializing in the interaction between science and religion. Perhaps more interestingly, I was a Young Earth Creationist until my early twenties. Yes, I believed that the earth was only 6,000-10,000 years old and that dinosaurs roamed the earth with humans. While growing up, scientific consensus was often portrayed as the enemy. I received a BSc in Biblical Studies and an MA in Christian Apologetics before becoming a minister. No longer a creationist, the experience still impressed upon me the importance of more productive conversations about religion, rationality and science. In 2012, I began a non-profit dedicated to creating spaces for such dialogue. In 2017, I moved across the pond to complete an MSc in Science and Religion at the University of Edinburgh, with my dissertation focusing on the philosophy of science and interpretations of spacetime. My PhD explores the role of hope in the dialogue between and integrative approaches to science and religion. More broadly, I am passionate about effective science communication, ethics and public policy, especially as it relates to engagement with religious communities. Currently, I serve as the president of the University of Edinburgh Science and Religion Society.

I am a second year PhD student based at the Roslin Institute at the University of Edinburgh. I study what common factors might be shared between different childhood and adult forms of motor neuron diseases (MNDs) and whether they can be targeted by drug treatments. I use animal models of different MNDs to detect similar patterns between these distinct conditions, and then use computer-generated predictive networks to hypothesise how these common factors might be contributing to the disease process. Finally, I am testing these identified factors for their ability to modify disease severity using fruit fly genetics.

Previously, I have worked to identify factors that can modify a childhood-onset form of MND, spinal muscular atrophy (SMA) as an MScR student and a technician in labs in Edinburgh and the USA. When I’m not in the lab I can usually be found running in the Pentlands surrounding Roslin, or cooking something to satiate the post-run/post-experiment hunger!

I am originally from the Netherlands and I came to Edinburgh in 2015 for an internship as part of my Biomedical sciences degree. I really enjoyed my time here and so I decided to stay and pursue a PhD. As part my PhD I worked on cardiovascular regeneration before I eventually decided to focus on macrophage biology.

Our final session of Series 5 was a discussion on GM crops.

Read the interview with our speaker, Uriel,  now.

Introducing our second Ig Nobel Speaker*Drum rolls*...Alexandre Coates. Alex will talk about the discovery that some people would be physically capable of running across the surface of a pond- if those people and the pond were on the moon.
Who’s ready to kick start the new term with our first Ig Nobel ChatSci? Our first speaker, Massimo Meneghello will present the Physics prize for “insights into why, when you bend dry spaghetti, it often breaks into more than two pieces” Yum! Come to the Argyle Cellar 18:30 27/01 or head on over to our Facebook to find out more
Our second Ig Nobel Chat Sci speaker: Mika Nanikashvili. Ever wondered how to uncook an egg? Come to the Argyle on Monday to find out how!
Meet our first Ig Nobel speaker Jim Finley, he’ll be presenting the award for literature: A report on reports on reports. If you’re as intrigued as we are head over to the Argyle on Monday at 19:00!
Meet Erola Pairo-Castineira, one of our amazing speakers for Monday’s ChatSci! Erola is a computational biologist who looks at how hair can be used to model the differences in human genetics, despite sharing 99.9% of our DNA. If you can’t wait until Monday you can find out more on our Facebook page!
Meet Andrew, one of our amazing ChatSci speakers! Andrew Yong is a 2nd year PhD student from the Department of Physics at the University of Edinburgh. As a theoretical physicist, Andrew studies a family of particles known as quarks. Some of these that make up the proton and neutrons. Along with the humble electron, they make up the world we see today. Interestingly, they exist in pairs, triplets, quadruplets and even quintuplets! Yet no single quark has been observed in particle physics experiments. Andrew joins the research group here in Edinburgh to study this phenomenon of quarks in large-scale computer simulations. By comparing simulated results with those obtained from experiments, the team hopes to test our understanding of the peculiar world at the quantum scale. When the working day is over, Andrew enjoys cooking (mainly the eating part) and dancing. You can find out more on Andrews work at the Argyle Cellar on 2/12!