InterSci’s Ask a Scientist events have been lucky enough to host a diverse group of scientists with fascinating stories! In case you missed any of them, we’ve collected some of their stories and anecdotes, so you can read about them right here. Click on the links below to find out more about each scientist.

It all started with basic biology. I spent a few years making models of Parkinson’s disease using transgenic common fruitflies and use these to screen for new drug candidates. We were able to discover a couple interesting ones.

My job as someone involved in a “virtual” biotech is to design experiments and find contract research organisations to run them as this is much more efficient. In order to do this, I have to stay on top of all new models and methods, see through the noise and select the best tool for the job.

Part of my job is to convince people to fund our work. The challenge of communicating a concise message to an audience of mixed backgrounds and being able to converse in their own language and hopefully convince them (under tons of stress) is one that I’ve particularly enjoyed. This is me pitching in Oxford. The guy on my right runs one of the top-5 pharmaceutical investment funds in the world. 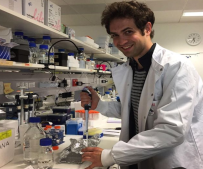 Alex Raven has nearly completed his PhD in regenerative medicine focusing on the liver: “As livers are highly autofluorescent, you need to clear them before you can visualise them under a fluorescent microscope.”

“Chronic liver injury such as alcohol abuse turns your liver from a smooth working organ to a rough mess which no longer works correctly.”

James has a background in environmental science and is co-founder ASCUS Art & Science. He has extensive experience developing, managing and delivering art-science initiatives since 2008, building a strong portfolio of projects leading to ASCUS establishing itself as a non-profit organisation in September 2013.

James was also involved in the Menagerie of Microbes artists talk for the Edinburgh International Science Festival 2016 with ASCUS.

Even though Miriam is not a scientist she does work with scientists an art-science laboratory context within her work with ASCUS. Miriam comes to ASCUS from visual arts; she joined the organisation in September 2012. She has extensive experience as a curator, in arts management, in arts in healthcare and in workshop delivery as well as her own creative practice.

Robin is Science Communication Manager at the Medical Research Council Centre for Regenerative Medicine at the University of Edinburgh. Over the past 16 years Robin has worked in academia and the pharmaceutical industry in a number of areas, with one thing in common: the effective communication of science to a wide variety of audiences, from specialists to the lay public. Robin trained as a neuroscientist before following a passion for communicating science. He has been involved in promoting clinical research, public and policy engagement, communications and marketing. Robin has a particular interest in the many different methods of engaging different audiences on their own terms, from interactive events to social media and video content. He lives in the Scottish Borders with a lively young family and two cocker spaniels.

I was born in 1987 in a small village in Germany. After finishing high school in 2006 I wanted to discover the secrets of life and started to study Biochemistry at the University of Ulm (Germany). To discover the world, I did an Erasmus-semester in Belfast, Northern Ireland. In 2009 I moved on to the Technical University of Munich to pursue a Master’s Degree in the more applied sciences of Molecular Biotechnology. During this time, I got in touch with some neuroscientists, and this was when I decided to start a PhD in Neuroscience at the Ludwig-Maximilians University in Munich in 2012. After I finally defended my Thesis early 2016, I stayed for a couple of months as a postoctoral fellow to finish my publication. Unlike many PhD students, I wanted to stay in science and although I had already some experience abroad, I felt the urge to do more in my life, so I ended up starting a postdoctoral position in Edinburgh one year ago.

Did you know the Bill Gates predicted the Coronavirus? (Well... sort of...)And that experts knew we weren’t prepared for a pandemic. We are having a screening of the Vox documentary ‘The Next Pandemic Explained’, followed by a panel discussion with experts on the matter. So join us on the 26th March 18:15! This is a free event that will be live-streamed on facebook. Find out more details on our Facebook event.
This is Marija ! Our second ChatSci speaker for Monday “I am a PhD student (4th year) in Autonomous Machine Learning. My research focuses on artificial generation of training data for autonomous systems, such as visual recognition systems and robotic manipulators. Autonomous systems do not require human supervision - they can recognise and track objects, control robots, even drive your car - all on their own. However, they need vast quantities of training data to initially learn to do so. Sometimes these real data are unavailable in large amounts - that's the domain in which my research is helpful. I deploy techniques of artificial data generation to help different autonomous systems to learn to do their jobs.” - Marija
Introducing the first ChatSci speaker for next Monday...our very own intersci president Jack O’Shea! Jack O’Shea Jack is a second year PhD student in Integrative Physiology at the University of Edinburgh. He studied his undergraduate in Natural Sciences at University College London. His project involves computational simulation of proteins in order to work out how to edit them to make their activity inducible by light, then testing these edits in worms.
Come and meet our amazing artists and scientists at our exhibition and panel discussion at The Forest Café 18:00 this Friday with @ascusartandscience See the incredible postcards and have the chance to ask the creators about their work
Art&Science on a Postcard 2020! Check on our Facebook page for more information. #ArtSciPostcard2020 @theforestedinburgh.
Who’s this?? Meet Arthur! His thesis is on automatic text summarisation and machine learning models. Try saying that with your mouth full 😅 Meet him at the Argyle on Monday!